The Science of Multiple Births

Does it seem like more people than ever are giving birth to multiples? How likely are you to have twins, triplets, or even quadruplets? What raises your chance of giving birth to more than one child at once? How much do you know about the science behind multiples? 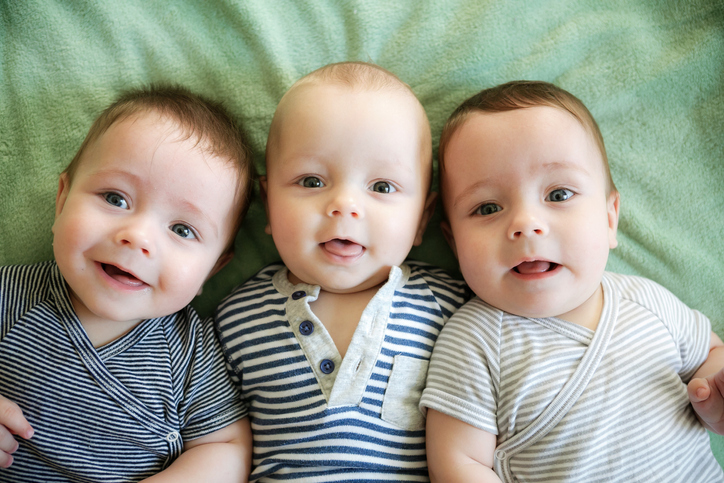 If you’ve noticed more families with multiples recently, you’re not imagining things. In the United States, about 1 in every 250 births is a multiple, a more than 75 percent increase since 1980. About 90 percent of those multiples are twins, which may be best because the risks associated with pregnancy grow with every additional child involved.

Why the steep increase in multiple births? There are many factors at play. First, the average maternal age is increasing. In 1980, the birth rate for women between ages 40 and 44 was only 3.9 births per 1000 women, but by 2003 that rate had climbed to 8.7 births per 1000 women. Women over 30 are more likely to release more than one egg during their reproductive cycles, so an older average maternal age means more multiple births.

Fertility treatments are another factor. Infertility is common in the U.S., with about 13 percent of couples pursuing treatment to help. A recent study indicated a 10-fold rise in the conception of twins following fertility treatments. The rate varies based on the type of treatment: in vitro fertilization (IVF) increases the likelihood, as does medication that stimulates a woman’s follicles, causing her to produce more eggs.

Is having multiples desirable? There are many complications with births that involve multiple babies. Prematurity, low birth weight, and stillbirth are all risks of a twin pregnancy, as are disabilities at birth and congenital health conditions like autism and cerebral palsy. For the mother, the risk of preeclampsia, gestational diabetes, and cesarean section are increased when she’s carrying more than one baby, and she’s more likely to have to go on bed rest during the pregnancy. Still, having more than one child at once is very exciting, and can be a fun experience for a family.

If you’re struggling with infertility or considering a vasectomy reversal, the Center for Vasectomy Reversal is here to help. Under the direction of Dr. Joshua Green, our team provides state-of-the-art treatment for men who need a reversal of their vasectomy or have other concerns about their fertility. Whether you’re ready to schedule a procedure or just want to learn more, you can contact us through our website, or call 941-894-6428 to arrange a free consultation.